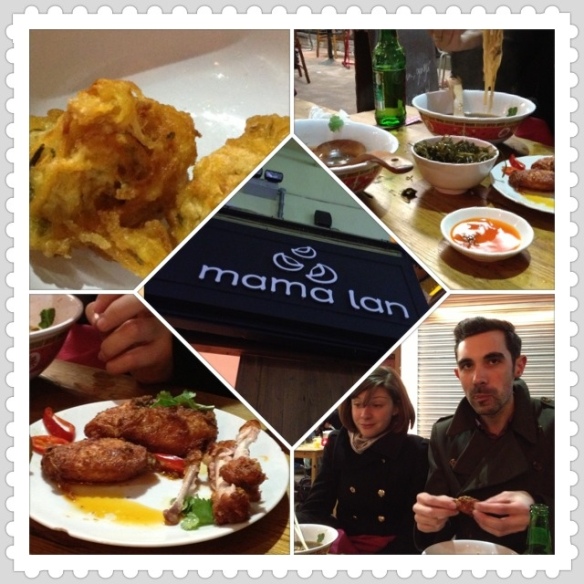 A quick bite to eat before the Band of Skulls concert – yum yum.
We had beef noodles, beef dumplings, spicy chicken wings, fried vegetable balls & pickled seaweed. It was all super tasty.
Point to note you only get chop sticks, so get practising or wear a bib!

The 18th November saw me compete in the Leeds 10K Abbey Dash. My 1st ever 10k competitive distance!

As you may have seen from my previous post, I practiced this distance just ONCE! I am so committed! I had set myself a target time of around 56 minutes based on my 5K times, and my ONE practice 10K!

I will admit that I got quite jittery, particularly the night before, as I was trying to calculate the pace time needed and the maths wouldn’t work, it seemed a lot faster than I originally thought! I kept denying that I was nervous only to need to wee about 5 times in one morning!

We got to the start with plenty of time for a good warm up…me stretching a little bit, Mr B running up and down, getting in the zone etc…whatever!

Out of the 9000+ people running I managed to locate my mate Danny, as seasoned runner, and we hung out as they tried to filter us through to the start. He had lovely intentions to run with me for a bit, but the excitement got to him, and he decided he would go for it. Especially after I told him Mr B was in the sub 45 section (we were in the sub 60 section!).

The 1st half of the run was great, and I was overtaking loads of people. I was nicely distracted when I started to see the Elite & faster runners coming the other way, and I began to look out for Mr B. I thought I would see him pretty easily but didn’t. but trying to spot him made the 1st 5K go really easily, as I was distracted pretty much for 2K.

At the half way point I decided to pick up a energy gel, YUCK, it was like someone had melted a handful of Haribo, nasty ones! Too sweet even for me!

Going back into town was harder, but it wasn’t until the last 1K that it was starting to hurt. I managed to spot the parents in law as I was getting to the finish, and my face was possibly a right picture, as I remember trying to smile, and that nearly made me cry.

I tried a little spurt at the end, but I was spent. Crossed the line in over 56mins I knew from my Map my run app, but wanted to wait until my official time came through, as this was my 1st race with a chip.

The finish was bottle necked quite a bit, and it took around 15mins to grab water & t-shirt. As I made my way over to find Mr B (who finished sub 43mins!) my time came through and I managed to do it in 56.43, which I was extremely happy about.

As a reward we went to Malmaison for a 3 course sunday lunch – well deserved I say!

Have a look around…

Old Posts – Have a look they might be fun!

Subjects I natter about

After a short break of 23 years I have registered to run the Melbourne Marathon.

I'm harder than you think.

the (sort of) intrepid adventures of a (sort of) runner

Tales from an East London kitchen.

Any idiot can run
FEAR

Forget Everything And Run

Cooking My Way Through Dan Lepard's Classic Cookbook, From a Flat in East Dulwich

The Philosophy of Delight

Sharing my life with you x

A love letter to food and south east London

Simple ideas for a delicious life. Home baking is my passion.

I begin as I mean to go on, fingers crossed I last!